a little hole appeared in my water turtle's shell.. 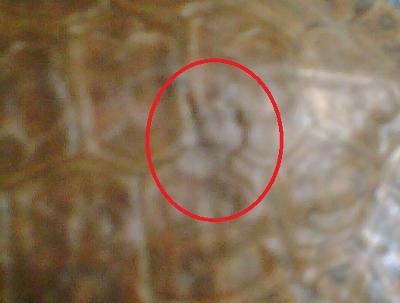 today i was cleaning my water turtle aquarium..
i moved it aside and noticed there there;s a weird red color on it's shell
i wiped it with a clean cloth.. it stayed..
so kinda brushed it away with an old tooth brush i had laying around..
they went away but i noticed while doing that tht there's a weird spot on the top part of the shell..
its almost like it's broken off..
its a bit lower than the rest of the shell.. kinda like a little hole.. its not very deep obviously..
and the turtle isnt affected by it.. it eats, swims normaly..
though its not as hard as the rest of the shell..
i never noticed it before...
am afraid that shes sick or something..
i've attached a pic of it though it's not very clear..