About my Red Eared Sliders 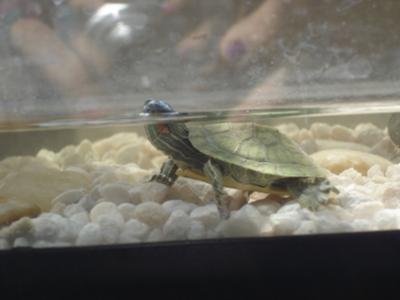 one of the red eared slider turtles

I have 4 red eared sliders, and one of them (the smallest one) just stopped eating. She stays all day either sleeping or stretching.

They have a water filter and a water heater, and the other 3 are just fine, but this one barely moves, doesn't eat at all, and seems to be terrified of the biggest turtle.

(2 of them have grown to be HUGE, while the other 2 have stayed very small...is it because the other two are more abusive and eat more?)

She's the only one that has remained with a light green colored shell, while the other three now have dark green shells.

I've also noticed that they sometimes make weird slurping sounds, but it's very random, and I can't tell which of them is the one making the sound....it's not the smallest one, though.

I feed them pellets, and sometimes small dried shrimps.

Is there any reason why the smallest one isn't eating? Thank you!