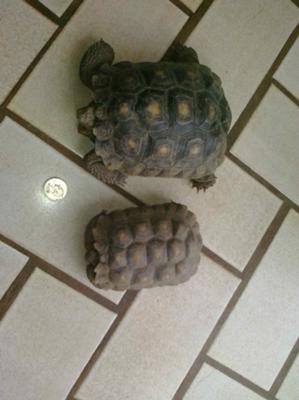 I have four 2 year old desert tortoises. Two became uninterested in food and lethargic so after a month or so I removed them from the pen to a more protective container to hibernate. My other two are still interested in food and show signs of normal activity. Lately, I brought them in at night because we had a few cold days and their pen doesn't have protection from the elements. I have been keeping them outside during the day and inside at night. Should I stop feeding them now to encourage them to hibernate? One of them is half the size of the other one. I also have been considering keeping him awake for the winter. He isn't sick, just a healthy runt.

Return to Ask Your Turtle or Tortoise Question.